Thank you! Your submission has been received!
Oops! Something went wrong while submitting the form

Nutrients for autism and ADHD.

Causes and symptoms of digestive dysfunction include:

However, supplements, special diets all may be ineffective if your child's body is not ready. We will need to address the digestive system, leaky gut, and or an inflammation.

Supplements are often wasted or taken at the wrong times, with the wrong foods.

Detoxification is the process by which chemicals and harmful substances are removed safely from the body.   Your child’s body has 4 different routes to remove toxins.

What is glutathione?
Short answer: The body’s chief detoxifier.
Long answer: Glutathione is created through methylation. Dr. S. Jill James has shown that 90% of children on the autism spectrum as well as their parents have impaired methylation.

“Glutathione is the major antioxidant present in cells and is responsible for detoxification and elimination of environmental toxins.  It’s active form is reduced 80% in kids with autism.”

"This pattern is consistent with an inability to detoxify poisons, especially heavy metals such as mercury or lead.  That is because glutathione normally binds to heavy metals and allows the body to detoxify them."

Dr. Jill James has received an NIH (National Institute of Health) grant for her research on autism spectrum disorder.  Impaired methylation and reduced levels of glutathione put children with ASD at greater risk from environmental toxicity from substances like heavy metals, pesticides, PCBs and other harmful chemicals.

‍Research shows that children with ASD and ADHD have impaired detoxification pathways. Children who are developing neurotypically are able to remove toxins like heavy metals, pesticides and chemicals more effectively from the body.  A developing child, for example, will use up two molecules of glutathione to get rid of one molecule of mercury.  Children with autism have less glutathione so it gets depleted more quickly, especially when there is a higher degree of environmental insult.  Proximity to toxic landfills has consistently been associated with elevated rates of autism and developmental delay.

How Can Chiropractic Care Help With Autism?

Anyone who knows anything about autism knows that the nervous system is greatly affected in this disorder, such as:

In addition, the nervous system is so intimately linked with the digestive and immune systems (the other two systems most commonly affected in autism) that it can also contribute to things such as bowel and bladder problems, autoimmune challenges, and more.

Read About Sally, Sam, And Daniel And Their Case Studies Below. 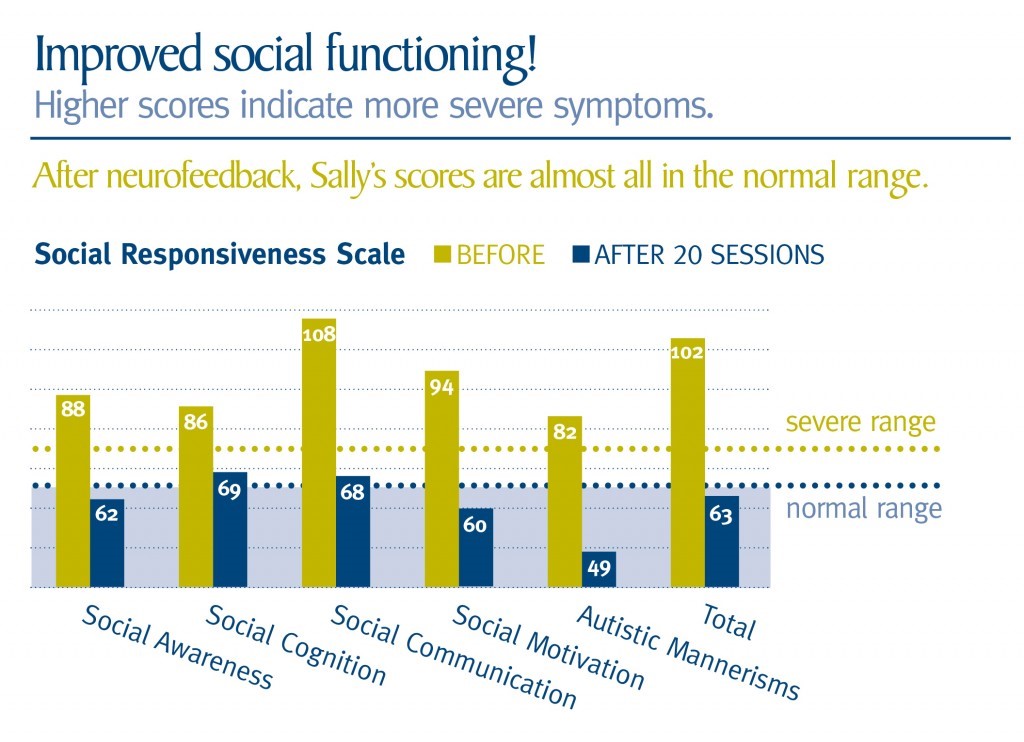 Sally was one smart little girl. But she struggled to understand the social world and to remain calm and in control of herself. She completely avoided playing with other children her age. She was rigid and bossy. She was diagnosed with Asperger’s disorder, a form of autism spectrum disorder.

Sally’s Mom was interested in neurofeedback as a medication-free treatment for Aspergers that could complement her other therapies. After ten weeks and 20 sessions of neurofeedback training, Sally showed very significant improvements in her social functioning. These huge gains are shown on the Social Responsiveness Scale (SRS) – a research proven measure of autism spectrum symptoms. This test was used before and after 20 sessions of neurofeedback. The results are shown in the graph to the right.

Her Mom told us that Sally was now able to enjoy herself in play with peers for the first time in her life and was much calmer, more flexible, and happier – in school and at home. 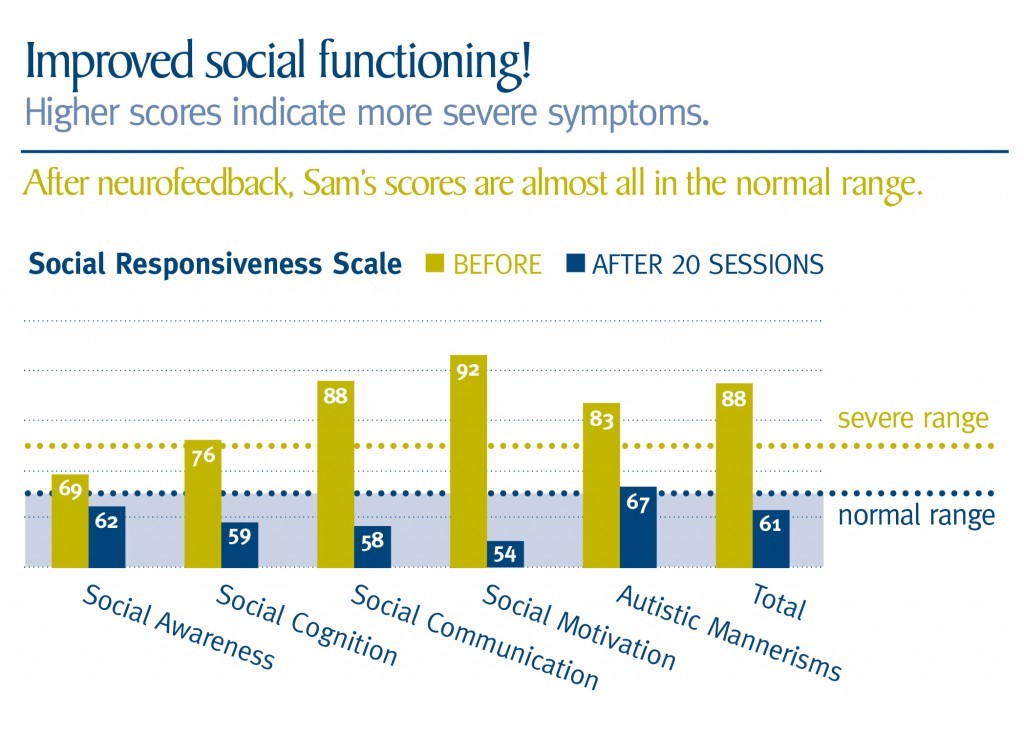 Sam’s Dad came to us looking for a new approach to treatment for his son. Sam was diagnosed with Aspergers Disorder. He was a junior in college. Although Sam had coped reasonably well in high school, he just could not handle the complexities of life in college. He became totally isolated and very depressed. He had to drop out of school.

Sam responded well to neurofeedback. In ten weeks, after 20 neurofeedback sessions, his social functioning improved dramatically. This improvement is shown on the Social Responsiveness Scale (SRS). This is a research-proven measure of autism spectrum symptoms. We employed this test before and after ten weeks of Sam’s neurofeedback training.

After 20 sessions of neurofeedback training, all but one of his scores fell in the normal range. He no longer scored in the Asperger range on the Gilliam Asperger Disorder Scale, a well accepted diagnostic instrument. His Dad joked at the time that he was afraid his son had become a bit of a party animal. For the first time in his life, being social was as much of a priority as grades! 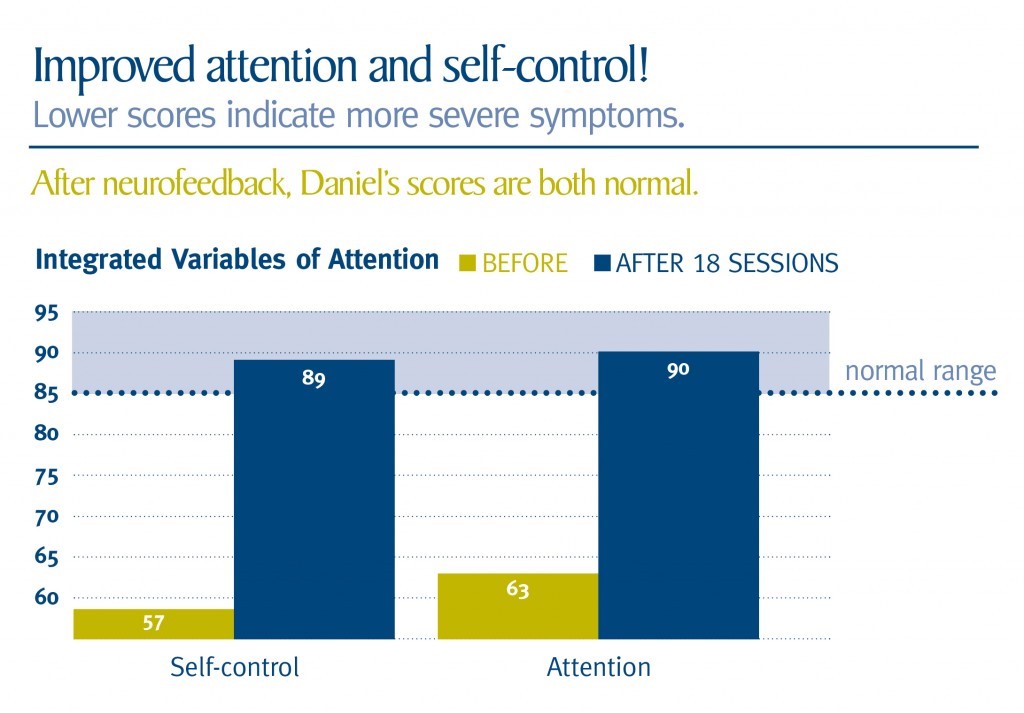 Daniel was getting excellent services in school, but his attention problems, impulsivity, and hyperactivity interfered with his learning and with his social development. His parents wanted to see if neurofeedback might be effective with these difficulties.

We used a research-proven computerized test to measure his symptoms before and after 20 sessions of neurofeedback autism treatment. The results show marked improvement in attention and impulse control. They are shown below.

Daniel’s Dad was so excited by his gains that he sent us two drawings that Daniel made of himself. One was drawn immediately before starting neurofeedback. The second his Dad asked him to do after his 20 sessions of neurofeedback treatment. All experts agree that children’s drawings reveal a great deal about their level of development.

These drawings suggest that Daniel’s development was accelerated by neurofeedback training. 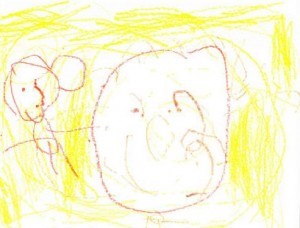 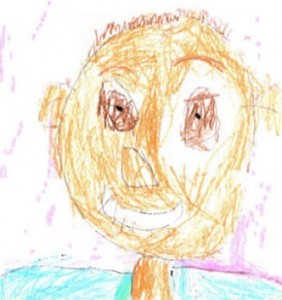